CCSD21 a school is comprised of 13 schools across 6 different communities in Illinois. 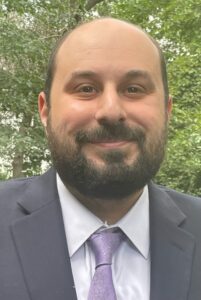 As an alumnus of Longfellow and Cooper, it’s no surprise that Sam Fabrikant is back in the district, this time working as a teacher. “It’s home,” Sam says. “It’s where I had a fantastic experience on every level and I wanted to give that same experience to others.” It’s also a family tradition. “My mom was a 4th and 5th grade teacher in District 59 for 38 years, and my twin brother (Charlie) was a teacher at Frost Elementary School before he became an assistant principal in District 15,” said Sam. Education runs deep in the family and it has become a tradition for the Fabrikants. While studying at ISU, Sam interned at Frost as a 5th grade general education teacher and at London as a 7th grade teacher. After graduation he taught 4th and 5th grade general education at Twain. Following his endorsement in ESL (English as a Second Language), Sam transferred to Frost as an English Language (EL) literacy teacher where he stayed for several years. Last year, he transferred back to Twain where he will begin his second full year as an EL resource teacher.

As such, Sam helps students develop literacy skills, such as speaking, listening, reading and writing. He works with students in small groups within the homeroom of gen ed classes, usually spending 45-60 minutes of dedicated literacy time with these students. “There are so many things that students need and being literate is key. It’s so rewarding to receive emails from former students who are now successful citizens. I’ve been told many times that I made a difference in someone’s life and I didn’t even know it,” said Sam.

And many of these connections have lasted a lifetime.

In his spare time, Sam continues to enrich his own life with more culture –  through travel (to Europe some day), with music (listening to almost anything), and through reading (favorites are biographies). He’s also taken classes at Second City with his two great friends and started the process of becoming a contestant on the TV show Jeopardy! And then there is football… a family tradition, attending Northwestern University home football games. Now that’s civilized!

“There are so many special people in District 21…From families to students to amazing teachers who have passion, creativity, and knowledge for their craft. I’m really fortunate to be able to work with such extraordinary people,” said Sam. We think District 21 is lucky to have Sam Fabrikant.

My Why - Emily Ford, Instructional Coach